Greg kindly organized a 4 day trip over Labour weekend for  those interested. The plan being to do the East Cape with an  overnighter halfway round. This trip would have been the stuff of nightmares for Rex,  had he been there. There were far too many BMWs in the  pack.

Everyone, bar the Wilsons and Nik met up for departure  from Farriers car park at 9 am. Today was going to be a rea-  sonable one in the saddle, with us covering over 400 Kms. Heading off the weather was not looking great but Ulyssians  don’t melt in the rain so we got under way with a leisurely  cruise up to Dannevirke with a quick stop for a fuel top up. Next leg of the trip took us to our old favourite, the Puketapu  Hotel for lunch. On arrival, Nik sent a text that he was about  100 Kms away and would catch up. Because we know he  travels sooooo slowly, we picked he would be there before we finished lunch. He didn’t disappoint and arrived before we all finished eating.

We chilled out while Nik got fed and watered and then we were off again, heading  north to Wairoa.
The weather, which to this point had been reasonable, decided to open up on us.  The pace slowed down a bit into the hills and twisties. Wayne, who had stolen Serena’s  new BMW R1200 GS for the trip, was the pussy of the pack in the rain, limping along like  he was on a mobility scooter, bleating about not being used to the bike, new tyres and his  visor fogging up and not being able to see.

From Wairoa, we followed the coastal route and arrived safely at Gisborne, where we made our  way to the Top 10 motor camp for our overnight lodgings. Once everyone was suitable rested and cleaned up, we all headed off to the Cossie club just a  short walk up the road for dinner and a few ales. The meal was pretty good with plenty of it and a reasonable price.

When we left the club to head back home, the heavens had opened and the rain was torrential.  After some discussion Mike, Nik and a couple of others decided to make a dash back to the motor camp. A very unwise decision as they got saturated. Those of us with wiser heads waited  until the courtesy van arrived back and rode back to our digs in comfort and stayed dry.


Saturday morning saw us up at sparrows and getting prepped for the day ahead. Breakfast for  most was the all day breakfast at the café just over from the motor camp.The rain gods decided that we hadn’t yet been sufficiently doused and preceded to wash our  bikes and gear.

Our route today was west to Opotiki via the gorge. This was a brilliant ride. The rain stopped  about quarter of the way through and the roads dried out and we were soon having fun zipping  through the twisties. We stopped midway through the gorge for a break before heading through  to Opotiki for a refuel.

Our route today was west to Opotiki via the gorge. This was a brilliant ride. The rain stopped about quarter of the way through and the roads dried out and we were soon having fun zipping  through the twisties. We stopped midway through the gorge for a break before heading through  to Opotiki for a refuel. 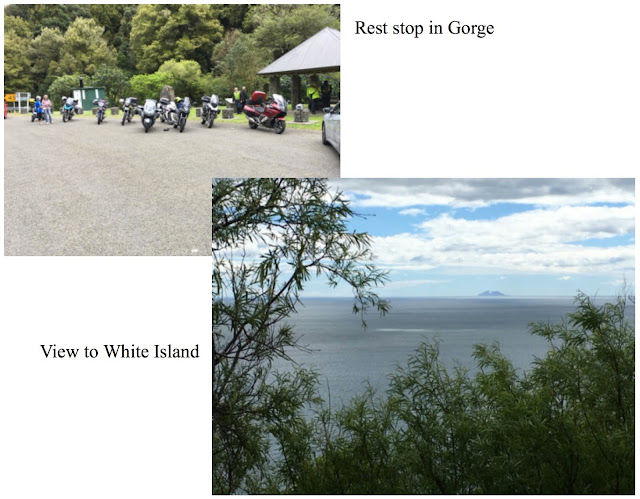 The weather was brilliant, all sign of rain well and truly gone. No wind and not too hot; perfect riding weather. The views were great.  Nice view out to White Island from a lay-by up from Hawai. Riding up the coast was a  great experience and very enjoyable. We had  planned to stop at the Pacific Coast Macadamia orchard and café in Whanarua Bay but it  wasn’t open when we arrived. We decided to continue on to Waihau Bay. Along the way, Bill Hammond decided to air his  clothes with his topbox getting indigestion and deciding to spew forth its contents.

We arrived at Waihau Bay, our stop for the night. Accommodation here was in units to the rear  of the hotel. View from the balcony looked out over the bay and the sunrise next morning was  pretty spectacular.

Another group of riders from Tauranga turned up later in the afternoon. They were a pretty good bunch and we ended up having a few beers with them during and after the All Blacks  rugby game. Mike was the only one able to hack the pace with us all hitting the sack while he continued on into the night, spinning yarns and flying the flag for the rest of us pikers. An excellent night; good company, a few bevvies and a 37-10 All Black win over our bretheren across the ditch.

Meals here were pretty average but still reasonable. Don’t think they planned on so many people being in for the weekend. 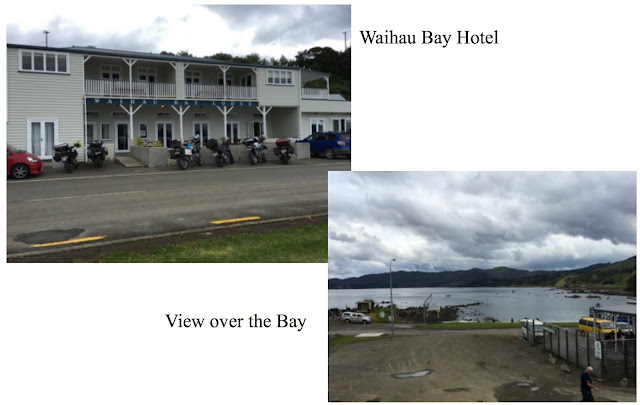 Day three saw us up early.... well some of us at least were up to see the sunrise. After a cooked breakfast at the pub, it was time to mount up and head back toward Gisborne. It was here that Bill and Vicki departed company with us and headed off to visit friends/family up Tauranga way.

Once we’d strapped Bill Hammond’s top box down, we were off, cutting our way inland from  the cape and off to Hicks Bay. It was yet another brilliant day for riding. The route to Hicks  Bay wound up and over the ranges. Pace through here was pretty good and we had a rest break at the Hicks Bay lookout. Once again the views were great.

Dropping down and around Hicks Bay, we headed through to Ruatoria, where we stopped for a  coffee break. A few of us stayed out in the sun just coozing by the side of the road. Some of the  local kids joined us, asking a million and one questions; where we were from, where we were  going, who owned which bike, and after Greg said kia ora to them, how come a white Aussie bloke knew Maori words. In short order they were sitting on our bikes with big grins and waving out to all the ‘aunties’ cruising past. They were quite hard case kids. 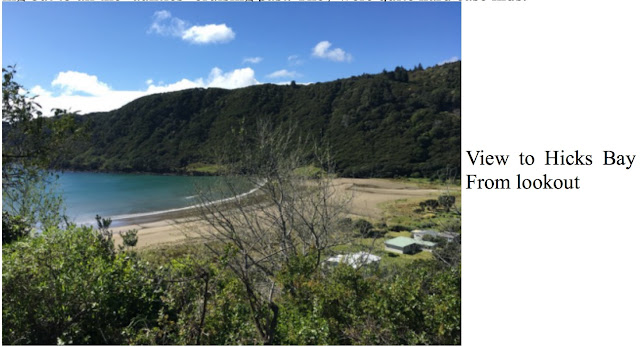 After our rest we were off again heading to Tokomaru Bay for lunch at the pub. Toasted sammies and fish & chips were the order of the day and were pretty good.

A bunch of us headed up to the old wharf. It is in a state of disrepair, with most of the piles  needing replacement and the concrete breaking down. There is a project under way to restore it,  similar to the restoration that was undertaken for the Tologa Bay wharf. One of the locals gave  us a bit of a run down on the restoration. Apparently it will cost couple of million to complete and there are also plans to restore the shipping office and old freezing works buildings. The  wharf and buildings were paid for and built by local farmers around 1911. The facility used to  service about 400 ships a year, taking frozen carcasses overseas. The works closed in the 1950s  and as with a lot of smaller towns throughout NZ, Tokomaru became a bit of a ghost town.  There certainly doesn’t seem to be much happening there. 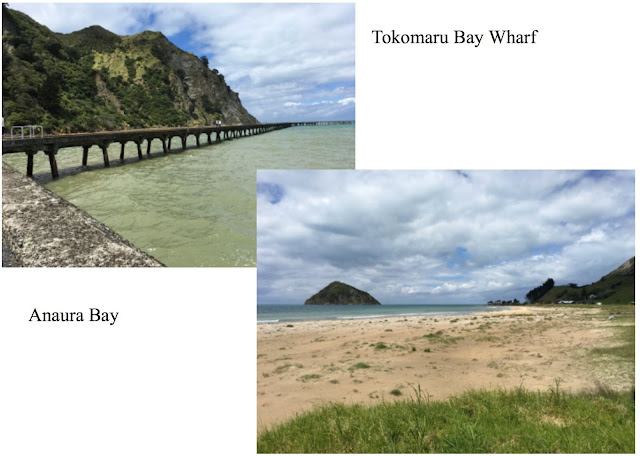 Moving on, we took a detour and made our way to Anaura Bay to take a look around. Nice  beach and looks like a nice place to chill out over summer. Camp ground right on the beach.  When we arrived here, Bill Hammond’s fuel gauge was telling him he might be walking. With  the next fuel stop still half an hour away, he managed to coax his bike along and coasted into the service station at Tologa Bay with a sigh of relief.

Some locals pointed us in the direction of the Tologa Bay wharf and we headed off there once  Bill was gassed up.
This restored wharf is 660m long and is the longest wharf in NZ. It was completed in the late  1920’s and allowed large coastal ships to load and unload. Around the same time as it was commissioned, there was already work underway to establish a road through to Gisborne. Most of  the shipping coming in over the next few decades was off-loading road building equipment and  materials. Once the road was through, it was spelt the end for the coastal shipping and yet another town lost its main source of employment and income.

Having spent a bit of time here roaming the wharf, we mounted up and made the last push  through to Gisborne and the Top 10 motor camp again for our final overnight stay. Andy and  Karen were there on our arrival, having ridden up from Napier.

With a boutique brewery just a stone throw from our accommodation, it would have been rude  not to stop in and sample their wares. After much sampling, purchases were made and we ambled back to consume said bevvies in the comfort of the motel rooms.

Dinner that night was a bit of a route march. We had planned to have a meal at an Irish bar but  they were full. So armed with Bill’s local truck stop knowledge, we set off across the river to try other establishments. Everything was full, not open, not for non-members or not suitable.  Heading back to town, we ended up breaking into groups and tracking down eating establishments of our own choosing. Burger Wisconsin, on Gladstone Rd had great burgers. 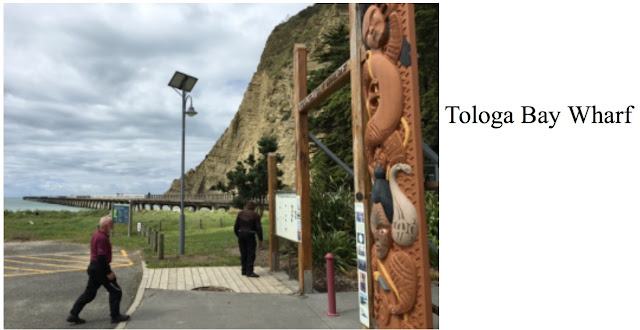 
For most of us, breakfast was once again at the café across the road. Everyone was up and  about gassing up and getting ready for the trip home.


Our chosen route for the trip back to Wairoa was the inland route. This was a brilliant ride.  Nice and hilly with lots of twists and turns. The view as we descended into the valleys was  spectacular. Nature decided to test us by depositing various distractions along the route. We encountered turkeys, goats, sheep, land slips and Bernard.

Bernard had an interesting day. Cutting through a corner with a police car coming the other  way, over-taking up hill to a blind crest, stopping at a two lane bridge causing Mike and Serena  to throw out all anchors to avoid him. And that was all before our first stop at Bayview in Napier for lunch and refuel.

The weather throughout the day was OK, with just a couple of drizzly patches. We had a  straight run through from Napier with a fuel stop at Dannevirke and then on home. Everyone would have been happy to slump into familiar chairs and rest. It was an excellent weekend,  with good company and great rides. If you haven’t ridden the East Cape, keep an ear to the  ground for future club rides up this way. It is well worth the trip.
Posted by Nik at 09:06