Happy New Year to all Ulyssians and their families. May 2016 be a great one.

Although I personally haven’t been on many rides up until mid January, the branch rides have been well attended. You will have read Doc’s report (in a previous post) about the three day ride to Napier and beyond which sounds like it was a fabulous trip. Andy & I missed this ride as we were in the UK. When we first decided to go I contacted Steve the Secretary of the Great Britain Ulysses Club, who lives fairly close to where we were staying. Andy and I had joined the Great Britain club when it first started up, (Andy being an ex-POM) and on the Great Britain Club website they have a forum page which members create discussions, so Steve posted a comment that we were heading over to see if anyone was interested in a catch up. So on the 3rd January we all met up for coffee at Yondermann Cafe, Warlow Mires in the Peak District of Derbyshire. As the weather was a bit miserable we all travelled by tin tops. Two of the members even travelled 3 hours from Liverpool to meet up, which was amazing. One of the members was a New Zealander who is going to try and plan a visit to New Zealand in 2017 and incorporate the National Rally in the Wairarapa. Great Britain Ulysses is still in its early stages and members do not have membership numbers and there are no branches as yet, but with membership building rapidly I am sure there will be several branches before too long. Was great to see how other clubs are run and the Great Britain one is very well organised and has some interesting souvenirs.

Wellington Anniversary weekend was a busy time for our branch, with the New Zealand Classic
International Cycle racing in the Wairarapa from Wednesday through to Sunday which is a major fundraiser for our branch. Thanks to Rex Bateman and his crew of road marshals for making this event the success it is.

We had a pot-luck ride for those not needed for the cycle race on Sunday which ended up going to
Norsewood for a coffee. Then as Monday was a holiday we had a gymkhana at Brian & Jo Bosch’s property which was attended by 16 club members and locals alike. Featuring slalom courses, obstacles and slow riding courses then a dash up the hill to finish. Brian supplied a BBQ for lunches to be cooked on and a great day was had by all along with a few sunburnt faces. Thanks Brian & Jo.

Coming up I am looking forward to attending the National Rally/AGM in Westport. We have a contingent of 23 plus the Wairarapa Rally Gnome that will be attending, which is magnificent for a club of 50 odd. A group of 17 is doing a bit of a tour before hand and will attend the GUSS Rally in Nelson before taking a leisurely ride over the next week, meeting up with the rest of our group in Blackball for a night at the Hilton before travelling up to Westport, for a weekend of fun and frivolity at the National Rally. 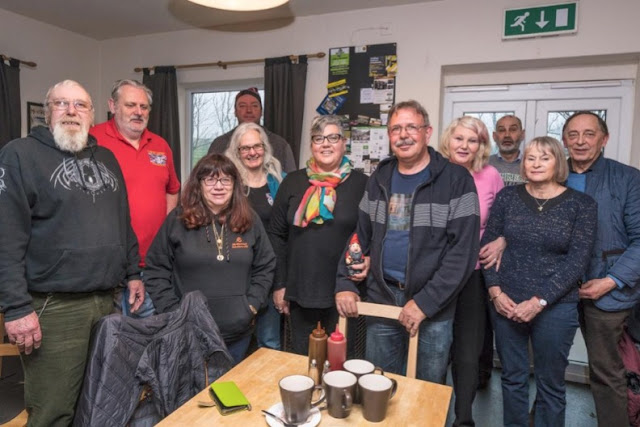 Andy and I with our National Rally 2017 Gnome with members of the Great Britain Ulysses Club.